Here are some symptoms that might indicate an intermittent problem with the electrical system after the boot. 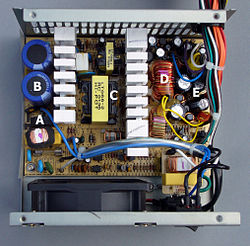 If you have just installed a new device such as a second hard drive or a DVD drive and are con-cerned that the power supply is not adequate, you might test it after you finish the installation. Make all the devices in your system work at the same time.

However, in most cases, the computer's power supply is more than adequate if you add only one or two new devices. Power supplies for microcomputers range from 200 watts for a small desktop computer system to 600 watts for a tower floor model that uses many multimedia or other power-hungry devices. If you suspect your power supply is inadequate for newly installed devices, upgrade to one with a higher wattage rating.

Power System Problem With The Power Supply, Boards, Or Drives

The power supply might be faulty or not be adequate for power needs, or components drawing power might be bad. These problems can cause the system to hang, reboot, give intermittent errors, or not boot at all.

A system with a standard power supply of about 250 watts that has multiple hard drives, multiple CD drives, and several expansion Cards is most likely operating above the rated capacity of the power supply, which can cause the system to unexpectedly reboot or give intermittent, otherwise unexplained errors.

Upgrade the power supply as needed to accommodate an overloaded power system. If these suggestions don't correct the problem, check the power supply by exchanging it for one you know is good.