Static electricity is the simplest form of electricity. A common example of this static-electricity is when one feels a small shock on a door knob or a tap. This is usually electricity being transferred from the knob to one's body.

However, static electricity could be very harmful especially when it comes to computers. Some of the main parts of a computer could undergo severe damage for example the CPU, memory, hard drive and main board chips.

How to Protect a PC from Static Electricity 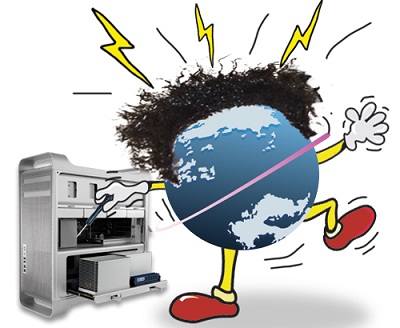 However, there are various methods that one could use in order to protect a computer from static PC electricity damage. First of all, one should shut down their computer and turn the switch on the surge protector in use off.

The surge protector should be left plugged in to ensure it is grounded. Also, before touching components inside one's case one should ensure to ground themselves so that any static build up is discharged.

Any static PC electricity build up one one's body then goes to the ground. Also, one should hold the expansion cards of the computer by the edge as well as not work on the computer while on a carpet.

One should also not use the computer when there are extremely dry conditions or when it is very cold because this attracts static computer electricity. To protect a computer from static PC electricity, people should be careful to keep their clothing far from memory, boards and drives and also avoid wearing nylon or wool because the clothes are usually electrically charged especially during cold and dry weather.

Moreover, the best conditions that a computer and totally avoid static PC electricity is when under humidity of around 60%. Also, one should leave the PC plugged in but the switch off so as to give ground to the used metal case.

Therefore, one would always work with a hand touching the metal case. This makes the build up of electrostatic discharge be grounded immediately like with the wrist strap. Usually a good number of the internal parts of a computer are damaged by static PC electricity. Therefore, one should take every possible measure to protect their computer from static PC electricity.